Major changes in the Helvetia contest this year being now International (any-to-any).

As I was supporting these changes in the rules, I took then immediately the challenge to operate outside of HB9, although not in one of the best DX location (south on Milan) due to the closeness to HB9 (propagation skip).

Second purpose was to finally enjoy on the air several weekends of station maintenance @IO2X.

I really mad a good and relaxed experience in the SO2R-mode with two keyboards outside major contests.

Conditions Key band was 40m followed by 20m. Amazingly good on 15m Sunday morning 09:00 to 10:30 but unfortunately no activity on SSB (CW skimmers were reporting good signal strength from EU to Asia and Pacific. Just 25 QSO, mostly with HB9. Highligts were to be called by H44MS, 4S7LF or by BI4WOP with 100W and a vertical antenna being his first QSO-ever outside of Asia.I was expecting more on 80m

HB9 Several canton missed, so I suppose there was a lack of activity as well. The snowfalls just before the contest (yes, we had a dry winter and snow on the contest weekend…..) may have prevented some portable operation to be on. Anyway, in general, I strongly support a widespread activity of all Cantons, even for a limited time during the contest (say 3 to 4 hrs) in order to keep up the attractiveness of the event.

Rules I personally see a potential of “shaping” the rules that may fit more stations to increase DX participation. I hope the organizers will take it into consideration (just to mention one: Low power category).

Scores I am persuaded that this new form will bring more participants, just think that top scorer DX-stations were working 150 to max 200 QSO in the whole contest just being obliged to work HB9 stn only. From the declared I can now see that i.e LZ2HA went from 193 Q to 400+ QSO and YO9HP summarized 743 QSO in the Mixed category

A big thanks goes to Luca IK2NCJ for his support and to all stations for the contacts. 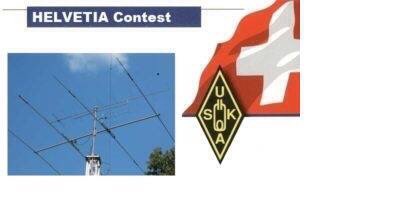 YES, the Helvetia Contest is becoming an international contest

There are two main major changes in the Rules: